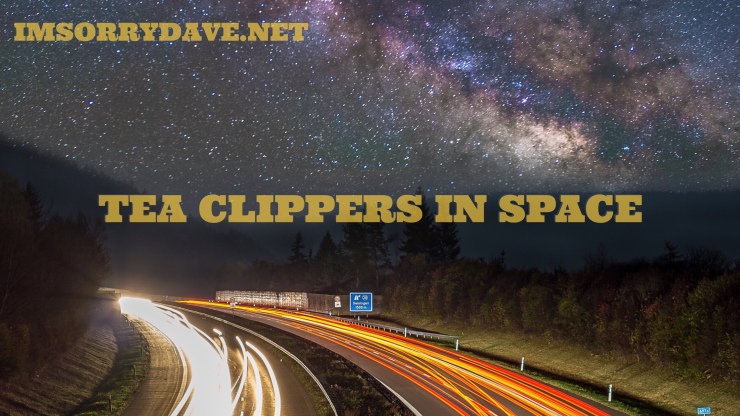 Going back a few hundred years to the time of the tea clippers and international trade by sailing vessels, we had journey times for the movement of exotic goods measured in months or even years from one side of the globe to the other.

As technology developed and in particular the advent of containerised shipping, fast reefer ships and air freight, we find ourselves now with transit times for goods from the other side of the world dropping to days or weeks (or months if you are prepared to sacrifice speed for convenience and cost).

The common conception is that times will only ever decrease with ramjets and hyperloops moving us and our goods around in ever shorter timescales.

However this assumes geography remains constant. In the far future timescales will again stretch into months, years and even decades for goods to move between point of origin and point of consumption.

This of course refers to interplanetary exchange of goods. While the realm of science fiction at present (take the awfully monikered “unobtainium” from the James Cameron film, “Avatar” for example) but there is already entrepreneurial martyrs with startups looking at mining asteroids and creating the early, sub first generation tech to do this. While they will almost certainly fall on their sword, they will nonetheless germinate technologies and aspirations for those that follow after.

One can only wonder what this tech will look like. Self replicating? Almost certainly. Self aware, perhaps not, but certainly imbued with a level of awareness that allows it to operate autonomously for years. This was something that appeared decades away only a few years ago, but look at the rapid advances in self driving cars, big data and voice controlled home devices. “Imagineer” this all melded in the altered form of an incredibly robust mobile mining and transport unit. JCB will ultimately enter the space race…but that’s another post 😉

When the transit times amount to decades, you are in a situation where cargo orders placed are processed on arrival by subsequent generations of workers. Brokers and shippers spend careers watching cargoes make their way along a single journey. Instructions between the shipping companies HQ and their vessel taking days or weeks to travel huge interplanetary distances. It is a completing of the circle with communications akin to mail packets travelling by wind powered vessels around the globe 300 years ago, only the carrier is electromagnetic waves traversing solar winds.

A young broker may spend their early years attempting to fix the cargo of a lifetime and then, on retirement see that same cargo being delivered.

Today bulk cargoes can change hands many times when en route via the selling of bills of lading. It may be endorsed several times with values of the grain or coal fluctuating as world markets change during the length of the voyage.

Fast forward to the far future, you may find cargo values over extreme periods of time, fluctuate in the extreme. At points being worthless and at others being worth hundreds, thousands or millions of their value at the inception of a journey.

Financial markets will need to be able to accommodate the huge spikes of volumes as these cargoes arrive in huge deliveries. Perhaps they will see orbital holding positions where cargo is released onto the market in a futuristic version of OPEC, tightly controlling the value of the cargo by dribbling into the market over tightly controls periods of time.

Time will tell but its fun to think about it!

This is a story about two men and their illogical pursuit of the Greenland shark in the coastal waters of Nordland, Northern Norway but it also much more than that. It takes the reader on a tour of relevant and wonderfully irrelevant anecdotes and facts all tied into the main arc of the chase.

The reader will be led a merry dance from subject to subject with wonderful ease and I found myself being confronted with uncomfortable truths about how we treat our oceans, the unknown extent of our cold water reefs (most of the public focus right now is on the warm water versions with their photogenic blue waters and colourful fish).

Then we effortlessly flit to the subject of creationism and the fascinating history of how we have defined the age of our earth over the centuries (and another book on Amazon order… “Earths deep history: How it was discovered and why it matters” by Martin Rudwick).

Also, who knew…the name “Scandinavia” comes from the work of the Roman author Pliny the Elder and means torn up or damaged and dangerous coast. Delightful.

Not since “Thinking Fast and Slow” has one book given me so many other spin off reads to pursue.

I was lucky to have this book with me on an expedition in these same waters to spend a week in the water with Orcas and Humpbacks as they pursued the herring into the Fjords around Tromvik and it captures the essence of Norwegian life by and on the sea.

Thought provoking, with a sliver of biographical anecdotes all interspersed with delightful trivia.

A good question and one that should be answered long before you ever give WordPress your hard earned cash!

I come across so much cool stuff and have been looking at ways to best log it for future use. Whether it is a neat bit of code, a cool new artist I have found, a good photography tip or just a great book or film, I have tried, and still use, everything from Mk1 grey matter to Apps and Evernote with varying success.

However this means that it is there only for myself. It does not get shared. Others who may find it interesting will likely have to stumble upon it themselves.

Also I get no personal feedback on it. I don’t get the chance to find out what others think which is most of the fun.

So… here it is. Don’t expect well crafted prose but expect the eclectic. It will only gel with a few but hopefully enough to generate some interest and discussion.Hope you enjoy, and even if you don’t, let me know either way!

Keep up to date

Keep up to date by giving us your email (first born, passport details, social security number and bank passwords) here...